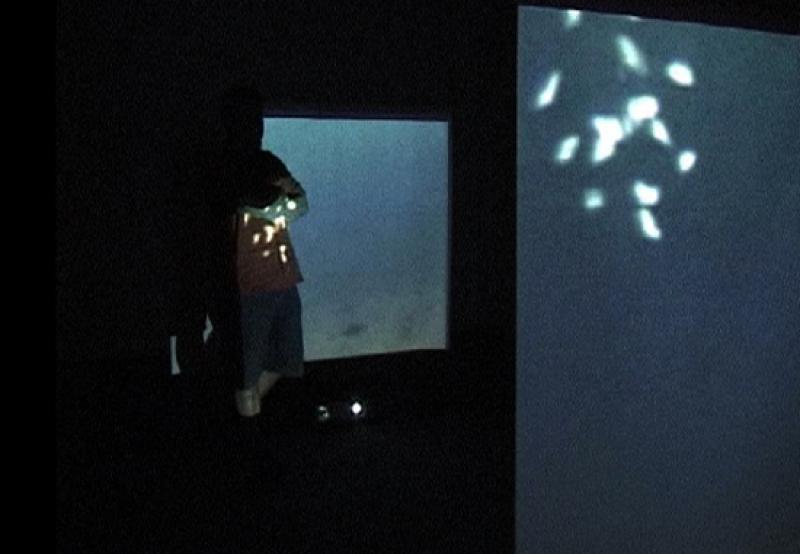 Dropping is contained in a small space, in which two rear projection screens float. On these screens are images of waves lapping as if the surface of the water was at the viewer’s eye level. The light and colours from these screens reflect around the gallery. When the system senses that movement in the gallery has stopped, the viewpoint slips down beneath the water. Compared to the other imagery, these images are calm; the still green light of the imagery reflects around the walls of the gallery. By standing midway between the two screens a viewer can interrupt the beam from the projectors and become part of the images. When movement occurs again, the imagery erupts in a jolt as the viewer returns to the surface.

Dropping suggests the sensory experience of floating at the surface and then diving down to be fully submerged. Humans can react in the water like sea mammals such as whales, slowing down to a meditative state and using less oxygen. This allows some people to be able to dive to depths of more than fifty metres with only a lung full of air. The deaths and accidents that happen from this type of diving do not happen because of a lack of oxygen, rather on the way back up to the surface a diver can black out after a moment of ecstasy because of an excess of carbon dioxide in the blood. It is this physical reaction to submersion, of slowing down, and the contrast to floating on the surface and being pushed around by the water that is the focus of Dropping.

If recently sensed activity in the gallery indicates more movement than in the past, the descending sequence is only short and the imagery played is close to the surface while the viewer is still. If the system has sensed that the space is quiet compared to past events, the descent is longer and the footage played while the space is still comes from the bottom of the sea. The slower the movements of the viewer, the longer and deeper the descent is.